Skip to content
Home//News//dementia//Discover how Hcsuk helped a Nottingham based outstanding care home bring the local community together. 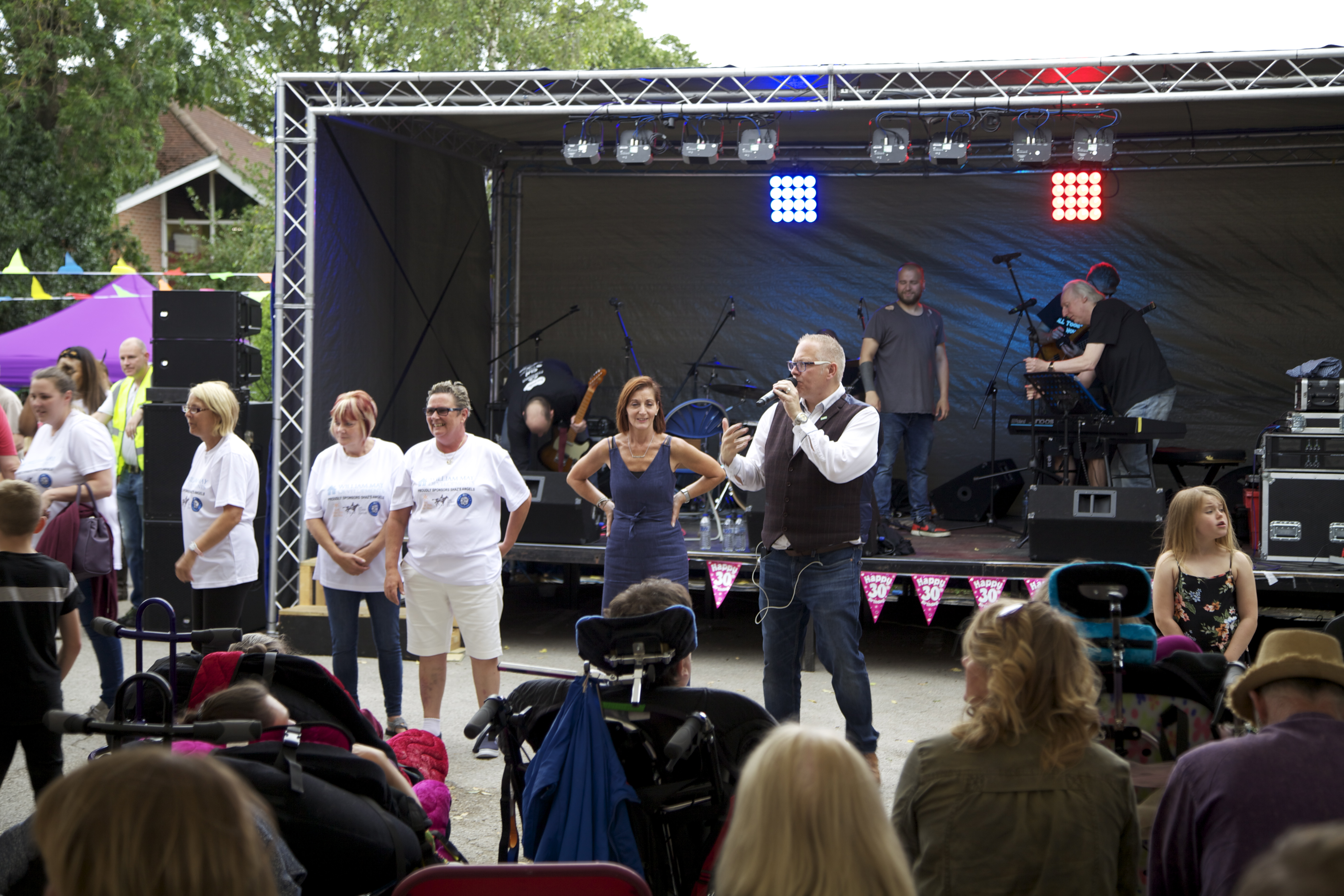 Landermeads Nursing Home, based in Chilwell in Nottingham, is a care home with a difference. Established in 1989, by Rob and Ros Heath, along with both sets of their parents, they are clearly very passionate about what they do and this shines very brightly in everything they do, within their philosophy of care, their fabulous team and the ‘family members’ they support.

It all started in 1986 when Ros and Rob announced to their parents that they would like to open a small family run nursing home in which the people who lived there received the highest possible support. A year later Rob’s parents, Phyl and Barry, had sold their house and moved into a caravan in the car park of a building site which was to become Landermeads, and Ros’ parents, Margaret and Derek, had placed their trust and financial support in the dream.

Ros’ godmother, Jane Lander, heard of their plans and asked if they would like to buy her house, The Meads, to make this happen. And so, in August 1989 Landermeads was born, its name a tribute to the support they received and a beautiful house which had been at the heart of Chilwell since 1711.

Today, Landermeads has developed into an outstanding rated care home with CQC, within the top 3% in the country, and has received countless accolades and awards, including being awarded at national level at 3 different awards ceremonies for their amazing and innovative dementia care.

And here at Hcsuk, we are very proud to have been working in partnership with Rob and Ros at Landermeads, as one of their principle suppliers of quality and fit for purpose product solutions for all of those 30 years.

Last Sunday saw Landermeads hold a very unique event, a music and beer festival, All Together Now, an event they host every year which is designed to bring together the whole community and this year with an added celebration of their 30th anniversary.

And we were absolutely delighted to be one of the main sponsors on the day, which allowed for all proceeds from sales of beer, food and other activities to go to Age UK. 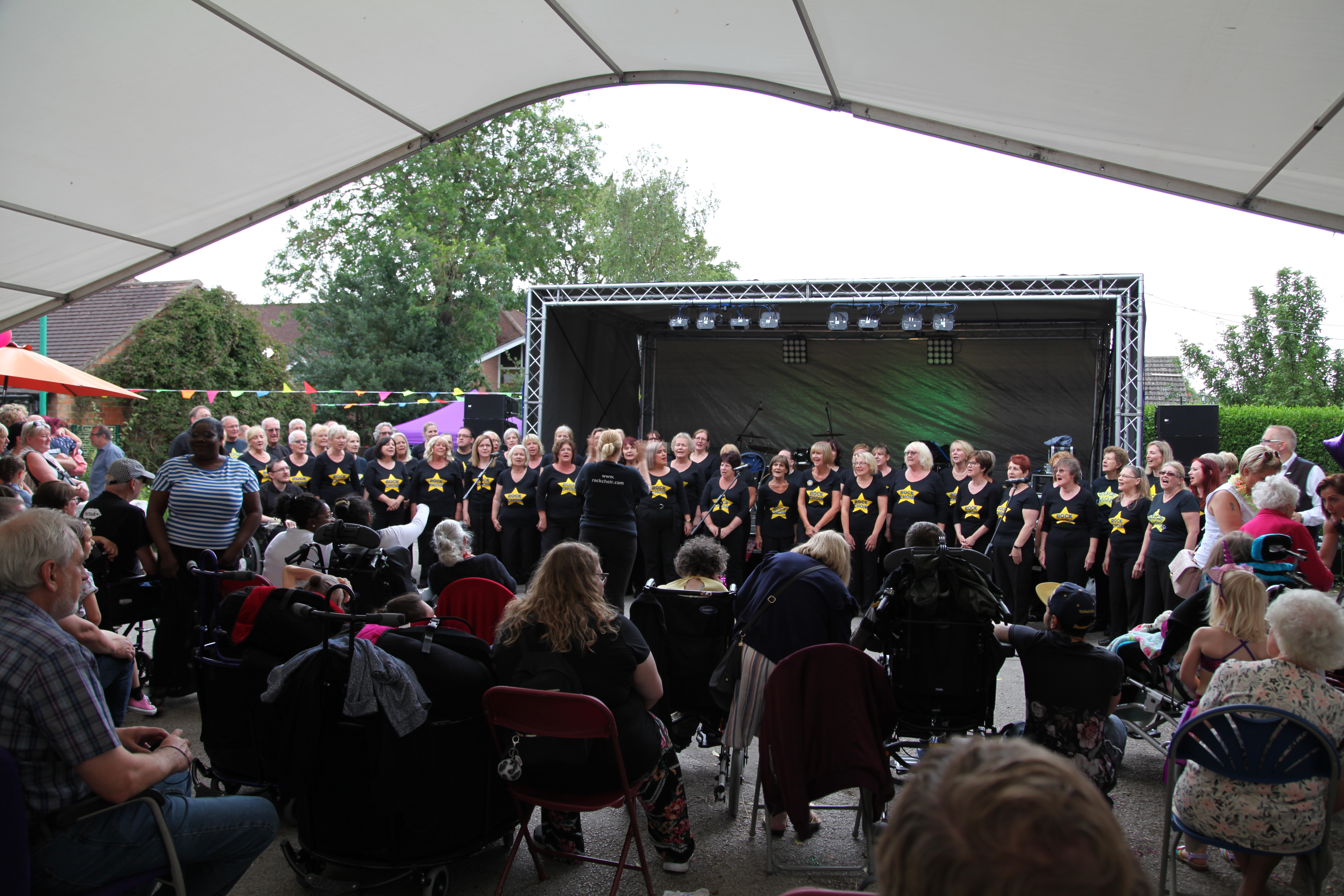 Arriving at around 2:30 there was already a buzz in the air. Big Ian Donaghy was mine host for the day and got everyone involved including the family members who live at Landermeads. The event saw local bands performing including Footlights who are a local theatre school and Rock Choir, who both sang well known songs and had the audience dancing and singing along. Even Ian got up and did a few numbers.

I could even hear the music from my back garden 5 miles away!

A favourite moment of mine was the festival fashion show where Ian had three teams of six create an outfit from arts and crafts materials in 10 minutes, the audience then voted for their favourite.

There were both mocktails, a prosecco and beer van, along with ice creams and a barbecue and with the weather being so lovely, it was very well received and you can tell that this event isn’t just something that the residents enjoy, but adults and children alike.

Jay Heath, son of Rob and Ros, told me he was ‘bowled over by the 800 plus people who turned out to support and enjoy the day, including many old friends of Landermeads and relatives of loved ones who are sadly no longer with us.

All Together Now shows how Landermeads support their family members and helps their loved ones too, but also raises awareness for Dementia. Ian Donaghy who has authored two books around the subject and who created the hashtag, #Dementiaisateamgame is lively and the perfect hosts for an event like this.

We can’t wait for next year! 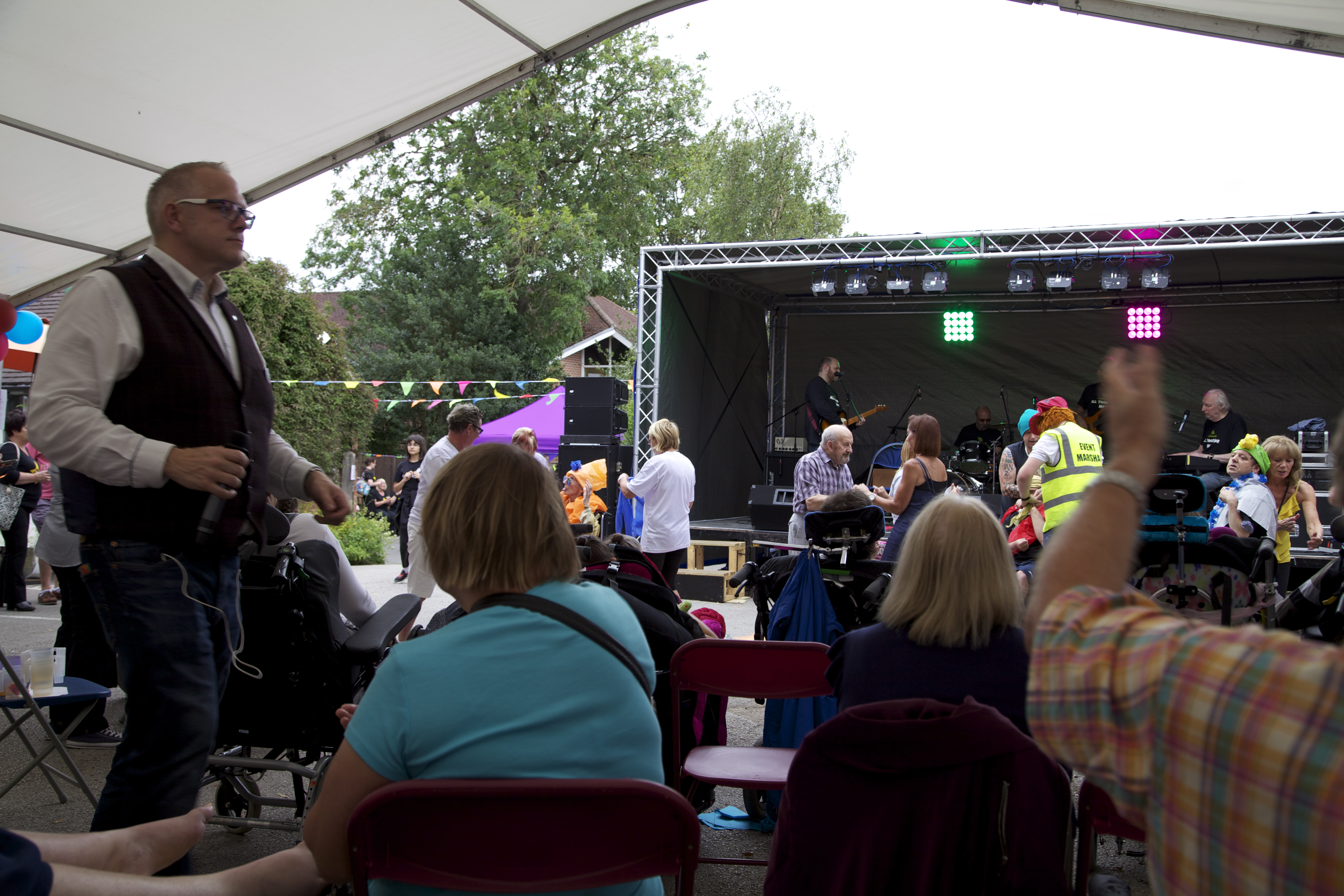 “We’ve built a strong working relationship with Hcsuk over many years, having used them to source, install and service our medical training equipment. We have always found the team very professional, helpful, and well-organised. We’d like to give a particular shout out to Phil, the technician / engineer who has been the consistent friendly face visiting our business to inspect and test our mobility hoists every 6 months. Thank you for all your support and advice.”

You are part of a great company, if we can help you grow by contracting you out to our sites its good for you, but it’s great for us because your service is fantastic, very efficient, everyone within Hcsuk is super helpful in answering queries and every time we’ve had an issue, Hcsuk has always been there to solve the problem almost immediately, which is fantastic.

Truly exceptional levels of customer service, the best I have experienced for many years. Very helpful staff made follow up calls to ask how the equipment was performing and supplied extra user instructions to supplement the manufacturers manual. I would not hesitate to order from this company again.

We would just like to pass on our thanks for all of your help with our orders and would be pleased if you would also pass on our thanks to the manufacturers for being so accommodating in meeting our requirements. We have found everyone very helpful.

Since I set up the account for Hcsuk over 18 months ago I have found them to be an excellent advocate of our products. They have been willing to learn about the technical and servicing elements to our hoists and the sales staff have really taken on board and proactively promoted our range where possible. I feel that as a company Hcsuk have got the desire and right people in place for growing in this competitive industry. They seem to push themselves to go that little bit further and offer that little bit more to stand out from the rest. May our relationship continue going from strength to strength.

As a care home manager I have used Hcsuk for my supplies for the last 20 years in two homes. I have always found them to be helpful and reliable. Their products are of the highest standards, they are able to source anything. The delivery service is prompt and regular so I do not have to keep large amounts of stock. They supply extra services such as servicing and repairs which are done efficiently, and training in COSHH. The reps are pleasant and helpful bringing new products to my attention but are never ”pushy”. Aftercare is good, any problems soon sorted. I would recommend them highly and would not think of using anyone else.

HPC have supplied Hcsuk (Health Care Services Ltd) for well over a decade now and we would consider them to be a high quality and professional business run in an organised and progressive manor. We do not rank our customers or have a preferred customer status but if we were to introduce such a scheme I can confirm that Hcsuk would easily make such a grade.

As a manufacturer we look for key values in a distributor some of these include honesty, reliability, commitment and reputation. Hcsuk carry all of these and many more. With a twenty plus year working relationship we now place Jo and the team at the top of our distributor list. I have no hesitation in recommending Hcsuk to any prospective manufacturer or customer and wish Jo and the team all the best for the future.

It is brilliant that we are able to ring Health Care Services and that you will go the extra mile to get us the stock we need as soon as possible.

Just to say a huge thankyou to you and your fantastic team, and I mean that from the Heart. I have never before experienced such a person centred company.

What I like about working with Health Care Services is the relationship we have built up and the personal service. The homes report that you always deliver on time, the quality is consistantly good and the prices competitive. Your team members are always willing to go that extra mile for us and if ever we have an issue there is always someone there to save the day.

Some of the products which can be purchased from the Hcsuk website are available for an eligible person to purchase without paying VAT on them. HM Revenue and Customs sets out the conditions when equipment for disabled people might be free of VAT and how to claim exemption from paying VAT on these products.

Products a can only be exempt from VAT when all the following conditions are met:

A more detailed explanation of each of these conditions is given below, but you should visit the HM Revenue and Customs Website to fully understand the conditions

The product must be being purchased for someone who is chronically ill or disabled.

A person is ‘chronically sick or disabled’ if he/she is a person:

‘personal or domestic’ use means that the supply must be made available specifically for the use of an eligible individual.

You don’t have to physically buy the goods in person. If your parent, guardian or wife or husband buys the goods and services for you, then you won’t be charged VAT.

What counts as personal or domestic use?

Products which are offered for sale on this website which qualify for VAT relief to be claimed for an eligible person.

The products which can be bought without paying VAT are:

Only the products on our site carrying the VAT exemption price (the smaller price marked ex VAT) are eligible to be purchased this way and you must tick the box on the basket page indicating that you wish to claim VAT exemption on the items in your basket that are eligible for VAT relief.

On the my basket page of this website a link to the online declaration form is provided if the basket contains a product that qualifies for VAT relief. You must tick the box to state you wish to claim VAT relief on the eligible product and complete in full the reason by which you are ‘chronically sick or disabled’ and name and address of the claimant. If possible the person making the claim should complete this form, but a family member, carer or medical professional may complete the form on the claimants behalf. To submit the claim and receive the VAT relief, click the ‘Submit VAT Relief Claim’ button before proceeding to the checkout.

Please note that all orders submitted with a VAT relief claim form completed are checked before the order is processed.

It is necessary to complete a separate claim form each time a qualifying product is purchased from Hcsuk.

Manage Cookie Consent
To provide the best experiences, we use technologies like cookies to store and/or access device information. Consenting to these technologies will allow us to process data such as browsing behavior or unique IDs on this site. Not consenting or withdrawing consent, may adversely affect certain features and functions.
Manage options Manage services Manage vendors Read more about these purposes
View preferences
{title} {title} {title}
0
Your Cart